I Don't Want Your Millions, Mister 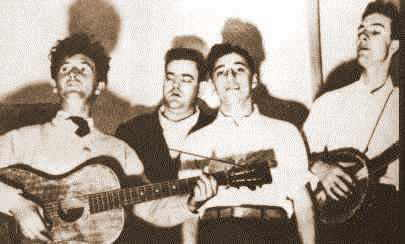 The song was featured on the Almanac Singers' 1941 album, Talking Union. It was originally written by Jim Garland, a union organizer from eastern Kentucky. In Woody Guthrie's memoir, American Folk Song, he describes his interactions with Garland at the home of their mutual acquaintance, the blues legend, Heddy "Leadbelly" Leadbetter. Garland was sick with tuberculosis at the time, and he often walked over to Leadbelly's house to escape the confines of his tiny apartment:

'Jim Garland was here in Leadbelly's house, and Jim's wife and their three children. Jim's children were sick lots of the time, and his wife took down with the fogs of TB. Then Jim got down with it, and for a long time he walked and fought it, and he would come to Leadbelly's house for the same reason why I had come, to find your strength to fight the thing that holds you back. He carried his wife, I forget her name right now, but he walked her here because the walk and the sun was good, because their apartment house was sunless, sickening, stinking, and old, run down, chipping away into the winds, and decaying like a marsh full of dead logs.

Jim got up the strength to play his guitar here, and he tried to tell us with his songs and ballads the stories of the ones that went down fighting. Half a song would be a clear story of how the murderous gunthugs hid in the brush and killed the union organizer, Harry Simms, and the other half of the song would be Jim's slogans, his sermons, his plea, his newspaper editorial, his whole appeal for you to come over onto the union side and fight. Jim made up several pieces, I never knew the exact number, I never tried to find out, I never tried to call a verse good or bad, I never had the energy to say that one of his lines needed to be rewritten, another line rubbed out, another one skipped, another one added. I found something bigger and better than all of this is the war that Jim Garland was fighting.'