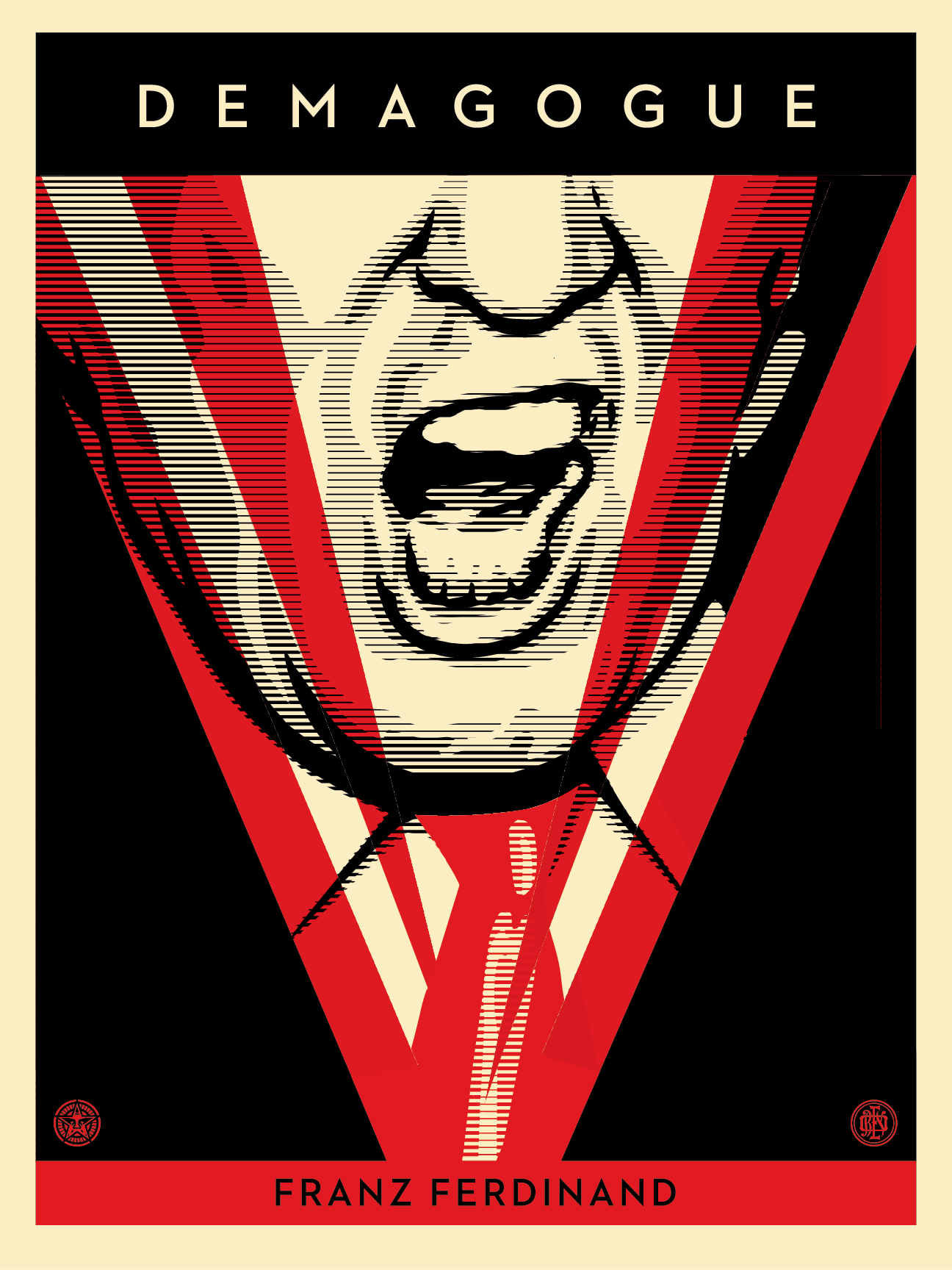 Franz Ferdinand are a Scottish rock band. "Demagogue" is the first release since their FFS project last year. Limited edition copies of the Shepard Fairey print featured above are available here. Proceeds benefit the Center for Popular Democracy.

A demagogue is motivated by ego and self-interest.

A demagogue amplifies prejudices and fears, whipping up a fury of hatred to distract from their lack of reasoned argument or considered thought.

A demagogue makes hollow promises. To return a nation to a fantasy state of greatness that never existed. To solve everyone’s problems.

A demagogue offers no evidence to support the promises they make.

A demagogue is not interested in the future and prosperity of the nation they wish to command, only in their own power.

A demagogue questions and undermines the validity of the democratic process, claiming it to be rigged against them.

A demagogue is a bully.

A demagogue is a narcissist, prone to comically exaggerated acts of vanity.

A demagogue is often a sexual predator, abusing their power to satisfy their lust.

A demagogue has no interest in facts or truth, lying easily and freely to meet their desires.

A demagogue preys upon divisiveness: they declare some ethnic or social group to be the enemy, and insist we rise together against them.

A demagogue has no regard for the vulnerable in society. They are to be derided, rather than cared for.

A demagogue is hot tempered and irrational, prone to capricious violent outbursts triggered by the slightest puncture of their gossamer-thin skin.

A demagogue uses any means to suppress their opponents, threatening to lock them up, and then, once in power, making them physically disappear.

A demagogue suppresses any voice that dare speak out against them. The free press is an early target: a demagogue undermines the credibility of the press during their rise to power, and then censors the press once they have seized power.

A demagogue is consumed by ambition, insatiable like the thirst of a rabid dog.

A demagogue is a threat to their own nation.

The more powerful the nation, the greater the threat to the entire planet.

He’s a demagogue Check out his rise He’s fatally famous He plays with my fears My shadow side dreaming It feels so good to be dumb From the Wall straight to La Quenta Those pussy grabbing fingers won’t let go of me now He’s a demagogue He’d like to punch in your face He's a demagogue Throwing terminal shade He knows all of the words He sees a nation of marks From the mob to chapter eleven Those tiny vulgar fingers on the nuclear bomb What’s a mother and father got to do with making me?