Panic Is No Option [live] 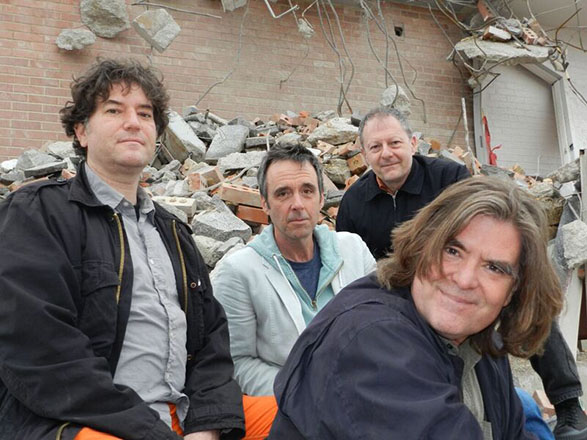 The song is not overtly political (almost no Burma songs ever were, despite the rap). Interpersonal politics are the topic here, as usual. But some of these lyrics could, um, be applied to the present political situation without much trouble. And panic is not an option.

Oddly, I am temperately optimistic about the current political scene. I believe The Reagan Era is finally over: Mr. Trump is its logical conclusion. During that horrible time in American History, Democrats were transmuted into moderately conservative centrists and ceaselessly harassed as (oh, please don't say that word): LIBERALS!

I was/am an enthusiastic Bernie supporter. I believe he knows more about the political world than I will ever know (and I bet he would respect my knowledge of the guitar more than his own if we ever got into a discussion on that topic). For this reason, I will be voting for Hillary, and I encourage others to do the same.

What Mr. Sanders almost inadvertently accomplished has not happened in many, many years. Actual ideas that are good for people! How novel...

He is poised, if Ms. Clinton is elected, to not only keep her neo-liberal attitude in check, but to inject real new ideas into the party with the support of many (including Ms. Warren). Here is where real change could happen—and I don't see it happening anywhere else. The way out of The Reagan Era.

So, please vote and watch the game unfold. If everything collapses, at least I'll be living in Vermont and can probably run into Bernie in Burlington and share a pint (good beer in Vermont).

See them crawling through the day on furtive unrepentant claws. Hear them howling in the basement. Listen to the donkeys bray. Sometimes you must cut your losses 'cause organized retreat is so much better than a rout. Don't leave the field to the enemy without a plan of action. Leave them tethered to the shit that they make every day. Their venom pools in a darkened corner. They'll never find the antidote to themselves... Melting back to daylight, the I behind the lens Fresh horizons flow beneath the current undertow. No one knows tomorrow and barely knows yesterday The daydreaming gate-keeper has uncollected fines. and that's fine with me... I can't tell you what to say, and even less what to do. But there's an essence somewhere that I believe is true. So even if you must cut your losses and just let some things go, that's so much better than a rout. Let the enemy try to get air out of a vacuum. But Panic is no Option. Panic is no Option. -- Live from Bullseye With Jesse Thorn, Oberon, Cambridge, MA 11/18/15 Recorded by Colin Anderson Additional production and mastering by Bob Weston