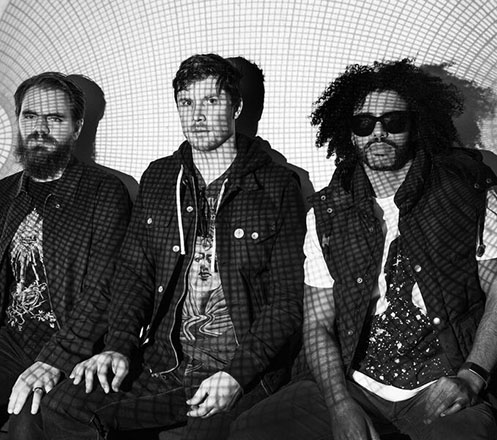 The latest album from clipping. is Splendor & Misery. It was released by Sub Pop Records in September, 2016.

When this project was first presented to us, we were asked to contribute our track “Knees on the Ground,” which was released on our SoundCloud back in 2014. The song is about the murder of a young, unarmed black person by an overzealous, militarized, racist police force. While that topic has not lost its relevance, we decided that it’s in some ways unrelated to the outcome of the current presidential race—racism in the US predates this particular contest by centuries and will certainly not be solved simply by keeping one overt white supremacist out of political office. Additionally, “Knees on the Ground” is a deeply serious song, whose tone fits its horrific subject matter. Listening through the tracks that other artists have contributed to the project so far, a sense of whimsy prevails. It is as if the different songs and their themes were written to complement the absurdity and the laughing-through-the-tears quality of the race. We saw this as an opportunity to indulge ourselves in similar frivolity, not to downplay the direness of the situation, but to engage in other established modes of political critique: satire, irony, and yo’ mama jokes.

Donald Trump has time and again proven himself to have the temperament of a petulant, whiny child. In the world of hip-hop, that behavior finds its most visible expression in the forms of battle rap and diss songs. We decided to address our attack in those languages. Our song is set on a schoolyard, using drum sounds constructed from fists beating on metal lunch tables, benches, and dumpster lids. Diss songs are made quickly and have very short shelf lives. They are often written and recorded in a few hours so that the tape can be delivered to Hot 97 before one’s rival’s tape arrives. They are quickly replaced and updated, day to day, by each subsequent response. In that spirit, we hope that this song will lose all of its relevance on November 9th. However, if it doesn’t—to our friends in New Zealand and Canada, we might need to leave our country in a hurry, so we learned your national anthems.