Grandmaster Flash and the Furious Five 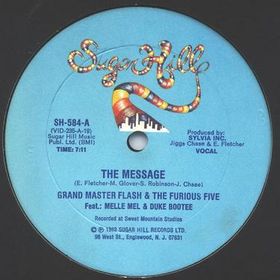 Grandmaster Flash and the Furious Five were a rap group from the Bronx. They are widely regarded as one of the most influential hip hop acts of all time.

Often cited as one of the greatest hip hop songs of all time, 'The Message' was released by Sugar Hill Records in 1982. It is considered one of the first rap songs to incorporate social commentary into its lyrics, and its success helped propel emcees from the background of hip hop to its forefront. In early hip hop, emcees played a secondary role to the DJ, who was considered the star of the show. But after the release of 'The Message', emcees emerged as increasingly important, with more emphasis being placed on their thoughts and lyrics as opposed to the DJ's scratching.

It's like a jungle sometimes It makes me wonder how I keep from goin' under Broken glass everywhere People pissin' on the stairs, you know they just don't care I can't take the smell, can't take the noise Got no money to move out, I guess I got no choice Rats in the front room, roaches in the back Junkies in the alley with the baseball bat I tried to get away but I couldn't get far Cause a man with a tow truck repossessed my car [Chorus] Don't push me cause I'm close to the edge I'm trying not to lose my head It's like a jungle sometimes It makes me wonder how I keep from goin' under Standin' on the front stoop hangin' out the window Watchin' all the cars go by, roarin' as the breezes blow Crazy lady, livin' in a bag Eatin' outta garbage pails, used to be a fag hag Said she'll dance the tango, skip the light fandango A Zircon princess seemed to lost her senses Down at the peep show watchin' all the creeps So she can tell her stories to the girls back home She went to the city and got social security She had to get a pimp, she couldn't make it on her own [Chorus] It's like a jungle sometimes It makes me wonder how I keep from goin' under My brother's doin' bad, stole my mother's TV Says she watches too much, it's just not healthy All My Children in the daytime, Dallas at night Can't even see the game or the Sugar Ray fight The bill collectors, they ring my phone And scare my wife when I'm not home Got a bum education, double-digit inflation Can't take the train to the job, there's a strike at the station Neon King Kong standin' on my back Can't stop to turn around, broke my sacroiliac A mid-range migraine, cancered membrane Sometimes I think I'm goin' insane I swear I might hijack a plane! [Chorus] It's like a jungle sometimes It makes me wonder how I keep from goin' under My son said, Daddy, I don't wanna go to school Cause the teacher's a jerk, he must think I'm a fool And all the kids smoke reefer, I think it'd be cheaper If I just got a job, learned to be a street sweeper Or dance to the beat, shuffle my feet Wear a shirt and tie and run with the creeps Cause it's all about money, ain't a damn thing funny You got to have a con in this land of milk and honey They pushed that girl in front of the train Took her to the doctor, sewed her arm on again Stabbed that man right in his heart Gave him a transplant for a brand new start I can't walk through the park cause it's crazy after dark Keep my hand on my gun cause they got me on the run I feel like a outlaw, broke my last glass jaw Hear them say "You want some more?" Livin' on a see-saw [Chorus] It's like a jungle sometimes It makes me wonder how I keep from goin' under A child is born with no state of mind Blind to the ways of mankind God is smilin' on you but he's frownin' too Because only God knows what you'll go through You'll grow in the ghetto livin' second-rate And your eyes will sing a song called deep hate The places you play and where you stay Looks like one great big alleyway You'll admire all the number-book takers Thugs, pimps and pushers and the big money-makers Drivin' big cars, spendin' twenties and tens And you'll wanna grow up to be just like them, huh Smugglers, scramblers, burglars, gamblers Pickpocket peddlers, even panhandlers You say I'm cool, huh, I'm no fool But then you wind up droppin' outta high school Now you're unemployed, all non-void Walkin' round like you're Pretty Boy Floyd Turned stick-up kid, but look what you done did Got sent up for a eight-year bid Now your manhood is took and you're a Maytag Spend the next two years as a undercover fag Bein' used and abused to serve like hell Til one day, you was found hung dead in the cell It was plain to see that your life was lost You was cold and your body swung back and forth But now your eyes sing the sad, sad song Of how you lived so fast and died so young so [Chorus] It's like a jungle sometimes It makes me wonder how I keep from goin' under